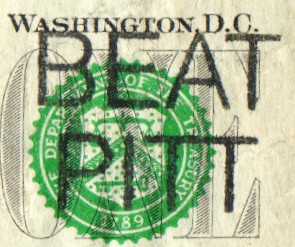 I woke up last Saturday, the first day of WVU football season with a brutal headache. My band had played the night before, and the evening’s drinking activities lasted until 5am. Around noon when I was beginning to wake up and rally for the weekend’s main event I ran up the hill to the Dairy Mart for the two things a hangover needs: Excedrin and Gatorade. When I got back to the house I realized that the two bills I had been given in change had both been marked with a slogan I can really get behind. On the first day of the 2008 season, I took that to be a very good omen. I’m gonna hang on to these all season, just in case we need a little luck.

He'll save the children, but not the Panther children